Realize your potential to be an exceptional coach.

The key to achieving this is all about developing self-awareness, and understanding your athletes as individuals.

Self-awareness is the recognition of one’s behaviors, strengths, weaknesses, beliefs and values and how these help create your experiences in life. Coaches who are more self-aware can control and exhibit the types of behaviors that create great and consistent performances.

Exceptional coaching is about much more than technical knowledge. Did you know that. 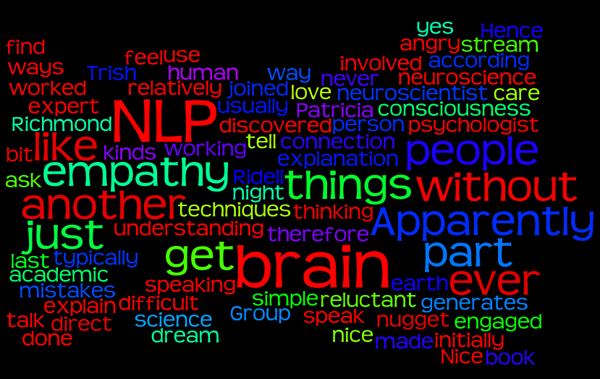 Using Clean Language can be a spectacularly effective way to create deep rapport with another person. The Clean Language questions compel you to listen carefully to what the other person says, so that you can use their exact words in your questions.  This combination of exquisite listening and uses the other person’s words typically makes them feel that you like and respect them, and are deeply interested in what they have to say – a great basis for rapport.

So, how does this compare with NLP rapport techniques?

However, Clean Language takes both these ideas much further than NLP. Clean Language uses only the client’s words and the Clean Language questions. There is no room for the ‘softeners’ which are encouraged in many NLP rapport trainings, and certainly no opportunity to introduce clever reframes or ‘Sleight of Mouth’ techniques.

In a fully ‘Clean’ session, the facilitator might muse silently to himself about the implications of a particular client metaphor. But he would not mention these musings to the client, or seek to extend or enhance the metaphor. In Clean Language, it’s not the  facilitator’s job to change anything, least of all the client’s metaphors. Any changes emerge organically, from the client.

It’s an accepted part of NLP lore that lots of eye contact is a good thing. In Clean Language, however, it’s thought that eye contact can distract the client – we want them to pay attention to their internal world, to their thoughts, rather than focussing on the person asking the questions. Think about it – when you are given directions, you don’t maintain eye contact with the other person. Instead, you pay attention to the internal map of the route which you are creating.

When two people are in rapport, their bodies often synchronise with each other. They will sit in the same position, or perhaps raise their glasses to drink at exactly the same time.   This natural effect is exploited as the NLP rapport technique ‘matching and mirroring’: the idea is that if you would like to get into deeper rapport with a person, you should deliberately match their body position, gestures, breathing rate etc.

It’s an observable fact that experienced Clean Language facilitators do often match their client’s body position and breathing. But this is usually not deliberate: it’s certainly not a formal part of the approach. And they will reduce their gestures to the very minimum, so that they can use their hands for other things – specifically, to direct the client’s attention to the symbols in their metaphoric landscape.

Gestures are in fact at the centre of the most dramatic difference between NLP rapport techniques and the Clean Language approach. In NLP, if the client gestures towards themselves – for example, pointing to their heart – and the practitioner wanted to reference that gesture, the facilitator would ‘mirror’ the gesture by pointing towards their own heart. In contrast, in Clean Language the gesture is assumed to refer to a specific location in space, and the facilitator who wanted to refer to it would gently point towards the client’s heart.
Source Clean Change

Pia Nilsson and Lynn Marriott are perhaps two of the most successful teachers in the game today. I say that because they coached Annika Sorenstam when she was dominating the LPGA Tour, and they also give advice to Yani Tseng, who is currently dominating the women’s game. But make no mistake, Nilsson and Marriott, founders of the Golf54 academy and Vision54 Coaching for the Future, also work with plenty of male golfers, including PGA Tour stalwart Kevin Streelman.

Nilsson and Marriott have written three books on golf with Golf World’s Ron Sirak. The latest, Play Your Best Golf Now, crystallizes the concept of the Think Box and the Play Box. Their first book, Every Shot Must Have a Purpose, however, introduces the concept. I think their approach will help you shoot lower scores almost immediately. Hey, if it works for Annika and Yani, why not give it a try. END_OF_DOCUMENT_TOKEN_TO_BE_REPLACED