Here are a few thoughts on Rory’s bunker game and what you can learn.

1. Make a ‘normal’ swing
Many of the students I see impart far too much slice spin onto their bunker shots, often because they have been taught to do so. They aim their bodies way to the left, set the clubface quite open, then cut across the ball to excess. This makes it difficult to get the ball started on the intended line. The ball will also spin to the right once it hits the green, again reducing the chances of the ball tracking toward the hole.

I find that all this effort does not seem to add that much loft to the shot, and it also presents a challenge in controlling distance when such a glancing blow is applied. I don’t see tour players doing so except in extreme situations. The average player would do much better by setting the body and clubface only slightly open, and then making a normal-feeling swing.

2. Take dead aim
If your goal is to get the ball out of the bunker, that is likely the best you’ll do. If your goal, however, is to hole every bunker shot, you’ll likely do so quite rarely, but I guarantee you’ll hit a lot more stiff. It’s the same idea as when sport psychologist  Dr. Bob Rotella asks his tour players to hole every shot within 100 yards. It doesn’t happen that often, but setting high standards and narrowing your focus can significantly tighten your shot dispersion. A great short-game practice drill is to hit a routine greenside shot until you hole it, be it a chip, pitch or bunker shot. You’ll be amazed how quickly it can happen. If you are a higher handicapper, make your goal to get the ball within a grip’s length. Before long, you’ll be holing out shots in practice and taking your increased confidence onto the golf course. 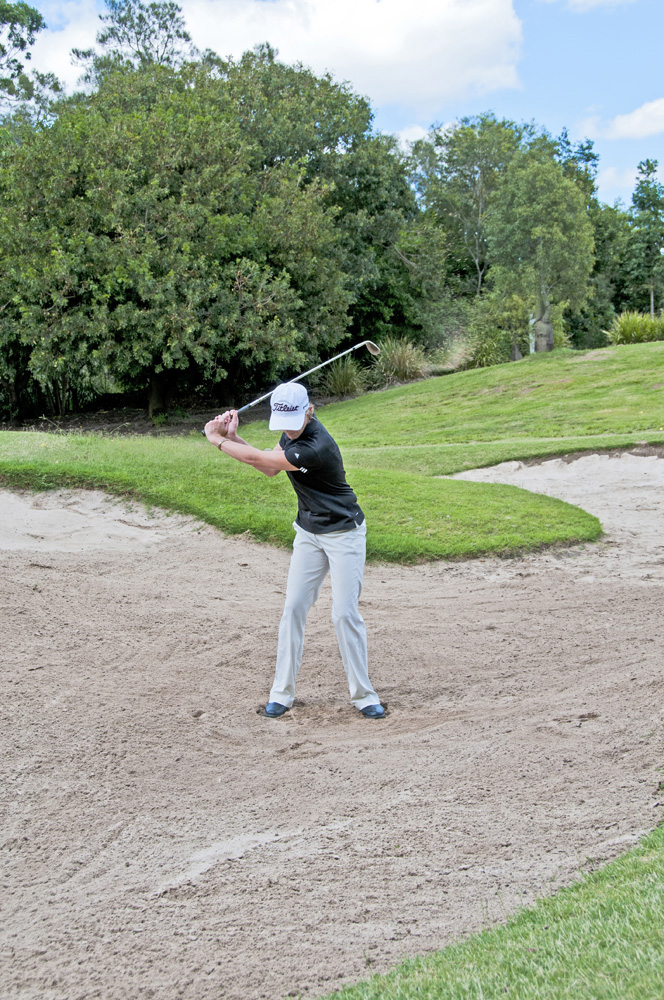 In the bunker, without a ball, set up into your set up position.  Open the face of your club up until the face is nearly pointing to the sky or parallel to the ground.  Scoop up some sand onto the club face.  END_OF_DOCUMENT_TOKEN_TO_BE_REPLACED

Set up a work station to a target you are comfortable with.  When you have placed your ball into that station now place another ball approximately 1 foot directly behind the first ball.  If you are not comfortable in using another ball, make a pile of sand in the same position, use a wood cover etc.   Make a normal swing END_OF_DOCUMENT_TOKEN_TO_BE_REPLACED

Bounce is the angle of the sole of the club that hangs below the leading edge of the wedge.

If you look at the bottom of your sand wedge, you will see some extra tilting down and away from the leading edge of the front of the club face.  The bottom of the club is shaped differently to help it glide through the turf or sand without digging in too deeply.  The back edge of the sand wedge is the bounce, striking the turf or sand first so that the club skips instead of digging in. 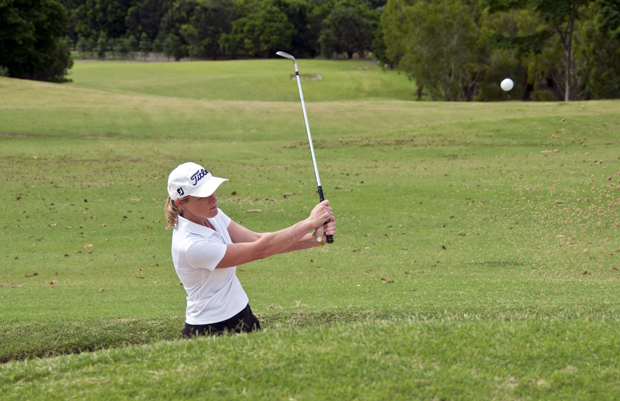 If you struggle to get your ball out of the bunker and you find yourself playing around with your technique.  Try these 4 tips:

Bunker shots require a free swing of the club head not the arms.  Swinging the grip more than the club head will END_OF_DOCUMENT_TOKEN_TO_BE_REPLACED