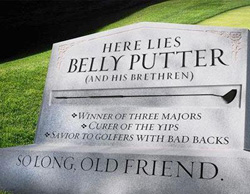 On November 28, the USGA proposed a rule change that will prohibit anchoring the putter when putting. This proposed rule change would take effect January 2016, but would still allow for the use of belly and long putters as long as they are not anchored to the body.

I have tried using a belly putter, but it did not work for me. I felt very restricted and lost the feel. With that said, I have never had a problem with other players using the anchoring method.  There are many reasons why golfers use it, including to protect the back and to steady the wrists.

“Throughout the 600-year history of golf, the essence of playing the game has been to grip the club with the hands and swing it freely at the ball,” said USGA Executive Director Mike Davis. “The player’s challenge is to control the movement of the entire club in striking the ball, and anchoring the club alters the nature of that challenge. Our conclusion is that the Rules of Golf should be amended to preserve the traditional character of the golf swing by eliminating the growing practice of anchoring the club,”

When it comes to protecting the integrity of the game, I am all for it. But with almost 1 million golfers leaving the game each year, we need to make sure we keep the game friendly and fun. I don’t know if this rule change will hurt the game, but I don’t see how it will grow the game either. No matter what the outcome of the proposal is, this is a big decision in golf. Many players around the world and especially those on the pro tour, will have very different perspectives.

What do you think?

From shafts that anchor into your belly to wild-looking mallet heads to unorthodox grips, putting is the one part of the game where you can really tap into your creative side. Your goal is simply to roll the ball in the hole, and there are many ways to do it effectively.

Honestly, it doesn’t matter which method you use, as long your wrists stay still during the stroke. You can see the variety of ways that tour pros have had success gripping their putters in recent years. As long as your grip makes it easy to minimize wrist action, then use it.

The most consistent way to roll the ball on line is with a torso-driven stroke–your upper body moves back and through like a pendulum. Your hands move the handle, but the wrists stay still for the most part. A hinging or unhinging of the wrists often alters the face angle and makes it difficult to roll the ball where you want. Because putters have so little loft these days, the position of the face at impact–not the path of the stroke–is almost completely responsible for the direction of the ball.

My advice is to try several different grips until you find one that helps you keep those wrists nice and steady.

SAM PuttLab, the ultimate putting training system is an analysis and training system based on an accurate ultrasound measurements. It analyzes the  28 most important parameters of your putting stroke and displays the results in easy to understand graphic reports. Discover your individual strengths and weaknesses for a better and more efficient training.

Within seconds the system gives you an individual feedback on your putting strokes. The analysis reveals even the smallest details of your movements and allows you to develop improvements and training strategies. SAM PuttLab utilizes ultrasound sensory analysis and therefore is far more exact than any other similar system on the market. Contact us today to try out the Sam PuttLab – The Ultimate Putting Training System

Have you been tested lately?

Set up 2 golf balls side by side and then walk in to your putting set up with the putter head behind both balls as if you are going to hit them both at the same time.  Pick a distance it can be long or short and create a putting stroke relative to that distance.  Your goal is to hit both balls at once and see if the balls travel a similar distance.  Watch what happens.  Does one travel further than the other, if so which one.  If the ball that was closest to the heel of your putter face travelled further then your putter face was open at impact imparting side spin and backspin on the ball.  If the ball closest to the toe of your putter face travelled further then your putter face was slightly closed at impact.  This would be the preferred outcome.  It indicates that you are creating side and top spin on the ball which will keep the ball on line and rolling more smoothly.

Ideally the balls would roll a similar distance for long and short putts confirming that your putter face is neutral to the path.

Try this drill for a variety of length putts; the outcome could be different from one length to another.

Place 2 coins on top of each other an inch behind the ball on the target line.  Three inches in front of the ball place 2 more coins on the target line.  Your putting stroke should cause the putter to miss the coins behind the ball, and then hit the coins in front of the ball after you have hit the putt. This drill will immediately get you hitting down on your putts instead of scooping them.  You will start to see and feel the ball roll better.  Your contact will also become more solid on the putter face.

Just like the golf swing, there are basically only three things that make the ball go on line or off line: the path, the position of the clubface and the quality of impact.

People forget that the quality of the strike is everything in putting. Within a fraction of a second of hitting the ball, you know whether or not you have struck it on the correct line. It’s instinctive; you feel it off the putter-face.

END_OF_DOCUMENT_TOKEN_TO_BE_REPLACED

Putt to the fringe of the green from a variety of distances, getting the ball to rest gently against the cut of the fringe.  Stand in the middle of the putting surface or putt from side to side.  Instant feedback, it is either too hard or too soft.  We are not concerned END_OF_DOCUMENT_TOKEN_TO_BE_REPLACED 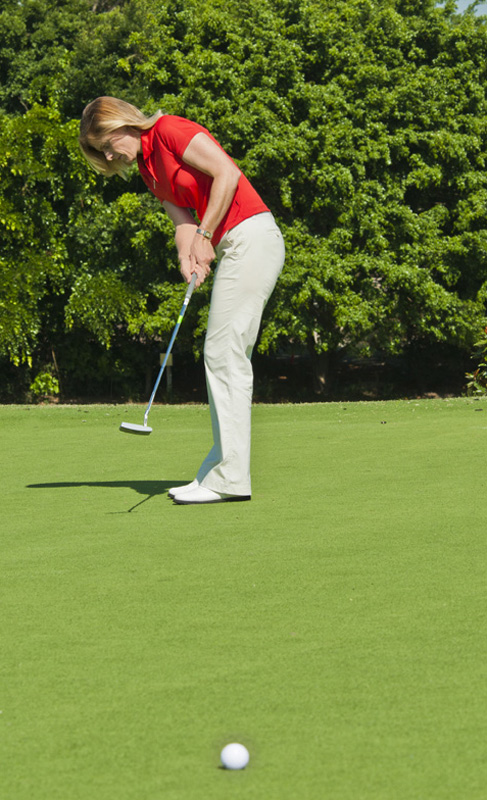 Creating a reliable routine prior to any shot is vital.  It is one of the most important tools you can have.  It will help you remain calm and provide a comfortable and familiar environment under pressure.  Use it to fall back on when your anxiety levels and emotions are difficult to control.

When putting, it is important to focus on the process and not the outcome.   There are many variations END_OF_DOCUMENT_TOKEN_TO_BE_REPLACED 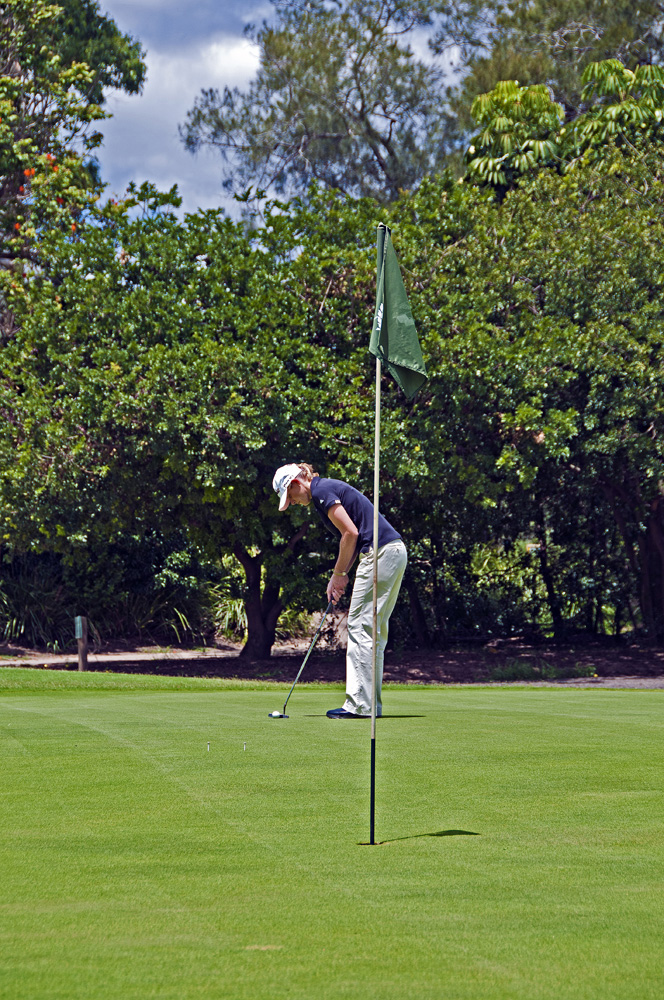 These are the two most important elements of putting.

It is essential to remember the longer the putt is the focus more on the speed and less on the line.  If you misjudge the line but have reasonable speed you will start to eliminate three putting.  Imagine a wide path to the hole with maximum break.  The speed is critical and approaching your long putts using this ideal will give you a better opportunity to make the second putt.  On the long putts your goal is to put the ball within tap in range, and that means distance control.

On short putts, focus less on the speed and more on the line and aim.

Whether it is a long or short put the length of your backswing will determine how fast the putter will move and therefore how far the ball will roll.  You are trying to create a pendulum which is an uninterrupted motion.  Control the speed with your backswing length. 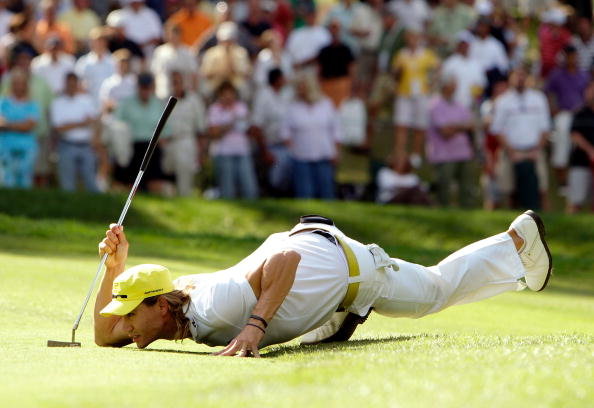 Being able to read the green, see the break and the line you want the ball to start on is a skill that you can learn.  The aim is to figure out what the ball is going to do after it leaves the putter, so you can make the ball leave on the right line to break to the hole.  The more information your brain has, the better it can calculate the outcome.